The phone call came in late one night last year. On the outskirts of Gressier, Haiti, two children were ill. The nurses for MotoMeds, a pediatric call center and mobile medicine delivery service run as a University of Florida research initiative, asked crucial questions about the children’s symptoms.

The principal investigator, Eric Jorge Nelson, M.D., Ph.D., a hospitalist in the College of Medicine’s department of pediatrics, and an assistant professor in the College of Public Health and Health Professions’ environmental and global health department, was on site to evaluate the program’s logistics and related research. Nelson strapped on a helmet to join the nurse and two motorcycle drivers on the call. The group rumbled up a mountain road strewn with river stones. As they climbed higher, the road narrowed. Soon, it was little more than a footpath. His driver made a hard left, brushing by a bush and ending up on a goat trail. He gunned the engine, willing the motorcycle onward until it bogged down in mud.

The group dropped the motorcycles, grabbed their gear and started climbing. After 15 minutes of hiking in the dark, they reached the family’s home about 11 p.m. They were expecting to treat two boys, ages 4 and 7, with skin infections. Instead, they ended up with three patients, including a 10-month-old neighbor girl with a fever and respiratory infection.

For MotoMeds, the late-night run exemplified the challenges — and honor — of running a medical call center and medication delivery service in the Western Hemisphere’s poorest country. Since launching in September 2019, Nelson and his colleagues have learned to expect the unexpected.

As part of an outbreak response team in 2010, Nelson saw cholera patients in Haiti dying because they did not have timely access to oral rehydration solution and sound medical advice. Over several years, Nelson’s team reflected on this observation in Haiti, explored solutions and expanded scope. Through community engagement in both Bangladesh and Haiti, a process called human-centered design revealed that barriers to knowledge and access to care are global issues. Emerging technologies might offer solutions to get early care to children, they decided.

One key barrier is isolation during the nighttime hours. In Haiti, nighttime illnesses can be particularly dangerous. Poverty, a lack of access to health care facilities and other issues can turn a manageable medical condition into a life-threatening one. Molly Klarman, who leads research in Haiti for Nelson and is the director of MotoMeds, conducted an extensive needs assessment to determine where families intend to seek care, where they actually seek treatment and the barriers they face.

“Very often, if we can provide simple oral rehydration solution and reliable medical information, we can avert an emergency,” said Nelson, a member of UF’s Emerging Pathogens Institute.

But Klarman found that getting to the point where families can readily seek care is anything but simple. In Haiti, the cell phone network is thin and fragile, sometimes making technology-based solutions problematic. Calls to MotoMeds get bounced to Port-Au-Prince, then to a U.S.-based company that uses cloud-based call management software. Ultimately, the parent of a sick child is connected to nurses at the MotoMeds call center in Gressier, who answer through internet-connected laptop computers.

At the call center, Haitian nurses do a detailed assessment of the child’s condition and triage the illness using a set of questions and clinical guidelines derived from World Health Organization guidelines. A local physician is on call in case of medical uncertainty. If it’s determined that the child needs basic medications or fluids, a text message goes out to MotoMeds drivers through Beacon, an emergency dispatch platform developed for resource-poor settings by a not-for-profit called TrekMedics.

As the MotoMeds director, Klarman has seen the immense value that quick intervention can provide for sick or dehydrated children. Because MotoMeds is a research initiative, nurses accompany the drivers to verify at the bedside what they heard on the phone. Ultimately, Klarman and Nelson hope to refine the system so that basic medication and fluids can be delivered by drivers with a nurse visit for some cases. A preliminary analysis of their work suggests that key clinical features captured on the initial phone diagnoses match the patients’ conditions seen at the household, Klarman said.

The goal is to get fluids and medications to a patient within two hours of a call coming in. MotoMeds has a delivery radius of about 3 miles. Typically, the nurse’s assessment lasts about 15 minutes and waiting for the motorcycle driver takes about that same amount of time, Klarman said. From there, travel time to the patient’s home can account for 20 to 45 minutes, based on location and terrain.

The MotoMeds response is especially crucial given the differences in health care that exist in Haiti, Nelson said. While hospitals are sometimes available and accessible, they require payment upon entry. In other cases, the on-duty physician is not licensed to care for children or isn’t comfortable doing so. During one life-threatening case, a hospital refused admission because the child was “too sick” and the attending physician — an obstetrician — was not comfortable treating a child. Incidents like that reinforce the value of MotoMeds, Nelson said.

“The majority of children — especially those under age 5 — die from preventable respiratory and diarrheal diseases that have known treatments. The real challenge is how to improve access to those treatments before the illness becomes emergent,” Nelson said.

The program was designed to be scalable, meaning it can be expanded to include additional delivery zones now that its technological and delivery infrastructure is in place. Parents or caregivers pay MotoMeds a flat fee based on what they can afford.

A donor’s gift comes at a critical time

The MotoMeds team had completed the early phases of their research when funding from the National Institutes of Health through the Improving Nighttime Access to Care and Treatment (INACT) studies ended in 2020. For MotoMeds to succeed, two more studies were needed —INACT3 and INACT4 — in order to move to scaled deployment, Nelson said.

“With a collection of small donations, we started to set up the launch for INACT3 with the hope that with just three months of study we would have sufficient data to pursue INACT4,” he said.

That’s when neuropsychologist Jeffrey Fitzsimmons, Ph.D., a UF graduate and professor emeritus and member of the PHHP Development Advisory Board, stepped in to help.

“As we struggled to assure ourselves that we could move forward, Dr. Fitzsimmons engaged with our team and committed funding that enabled a now multi-month deployment of INACT3 which is already proving successful,” Nelson said. “This success and the donation has inspired us to think creatively on how we can proceed to scaling in Haiti and expanding to other countries. We would have shut down INACT3 without his contribution and children would be back to where they were three years ago with no option for health care at night in rural Haiti.”

Averting medical emergencies as MotoMeds does is ultimately a more cost-effective and humane approach than allowing them to fester into something more serious, Nelson said. On one MotoMeds trip closer to the center of Gressier, MotoMeds arrived about 11 p.m. to find young parents with a feverish infant. There was a pause as the parents sized up the MotoMeds team clad in red helmets and neon yellow safety vests. Nelson asked one of the nurses what was happening.

“She said, ‘He has never seen anyone show up at night to take care of children,” Nelson recalled.

Nelson sees it this way: MotoMeds is new and struggles to gain users. But it is also catalyzing trust across the community that someone will answer their calls and indeed show up to their houses.

“It offers a transformative change model for Haiti and the global health community,” Nelson said.

Views from a pandemic

College faculty, staff and students share the struggles, surprises and silver linings in an unforgettable year 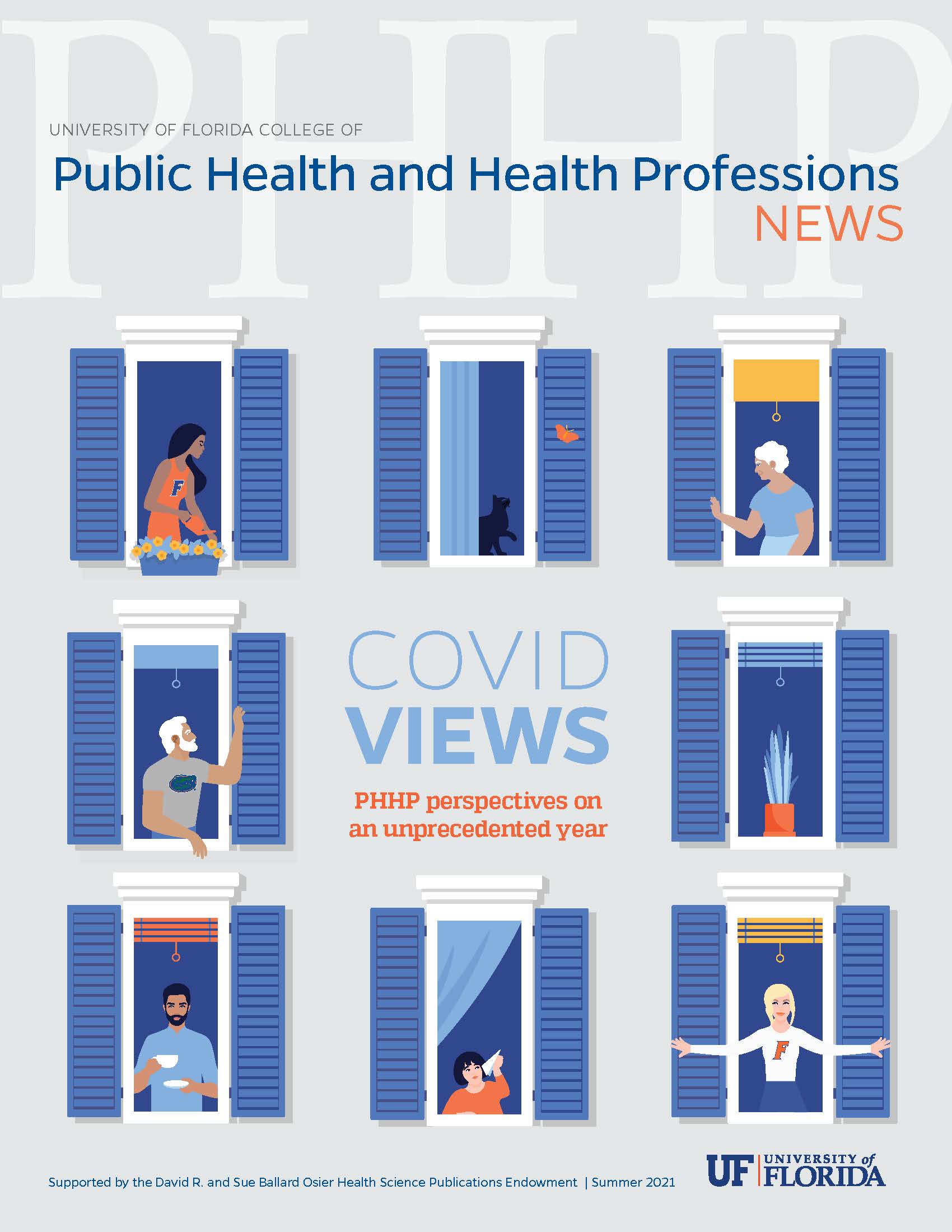