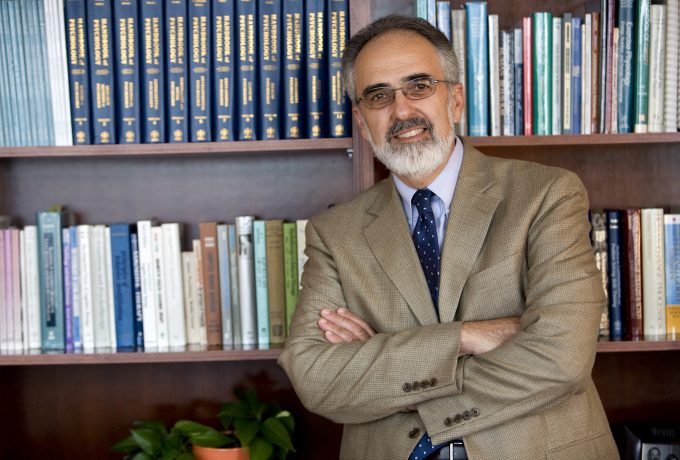 At institutions of higher education, no event tops graduation. It is thrilling to see students reach this milestone after years of hard work, and to watch them celebrate alongside their families, friends and instructors.

This spring, we had the privilege of hosting public health champion Dr. William Foege, and renowned education advocate Dr. George Hagerty, who helped us honor our graduates as speakers at end-of-academic-year events.

While serving as a missionary doctor in Nigeria in the mid-1960s, a village outbreak of smallpox forced Dr. Foege to re-think the standard vaccination policy at this time, which was to vaccinate everyone within a certain radius. They simply did not have enough vaccine on hand. So, Dr. Foege and his colleagues developed a different strategy. They identified and vaccinated the nearest, most susceptible people before the virus could infect them.

With this approach, less than 10 percent of a targeted population was vaccinated, yet the area reaped the community level benefits of disease elimination. Based on this success, Dr. Foege was tapped by the Centers for Disease Control and Prevention to lead the Smallpox Eradication Program. By finding and treating people who had been in contact with smallpox, instead of relying on mass vaccinations, the program completely eradicated all smallpox in the world by the late 1970s.

Dr. Foege went on to lead the CDC and co-found the Task Force for Global Health. As a senior fellow with the Gates Foundation, Dr. Foege was a key adviser to Bill and Melinda Gates during the creation of their global health foundation. For his many contributions to global health, Dr. Foege was awarded the Presidential Medal of Freedom in 2012.

In his 2012 book, “House on Fire,” Dr. Foege describes an intangible element of the smallpox eradication effort: the belief that it could be done.

Dr. Hagerty has long been a national leader in education, particularly for those students with disabilities. He began his career with a postdoctoral fellowship at the U.S. Department of Health, Education and Welfare and went on to serve in a series of posts in the newly created U.S. Department of Education. In these positions, he led branches that oversaw personnel preparation and policy compliance in the Office of Special Education Programs. Since leaving federal service, Dr. Hagerty has been called upon to serve as an adviser to several presidential administrations on issues related to special education, rehabilitation, state-federal relations and educational finance.

Dr. Hagerty believes it is important to help students with disabilities shift their focus from their “island of challenge” to their capabilities, interests and ambitions. Educators should guide students away from a lifetime of managed expectations to the empowerment of self-advocacy and the toppling of barriers, he said.

“The real danger for students who learn differently is that they may mistake their ‘island of challenge’ as the dominant landscape of their lives,” Dr. Hagerty said. “It is not.”

When Dr. Hagerty talks of empowerment for people with disabilities, he speaks from experience. Due to retinal disease early in adulthood, Dr. Hagerty has been legally blind for more than 20 years.

There is so much our students, and all of us, can learn from Dr. Foege and Dr. Hagerty. I hope our graduates are inspired by these leaders to approach their own careers with courage, creativity and conviction.