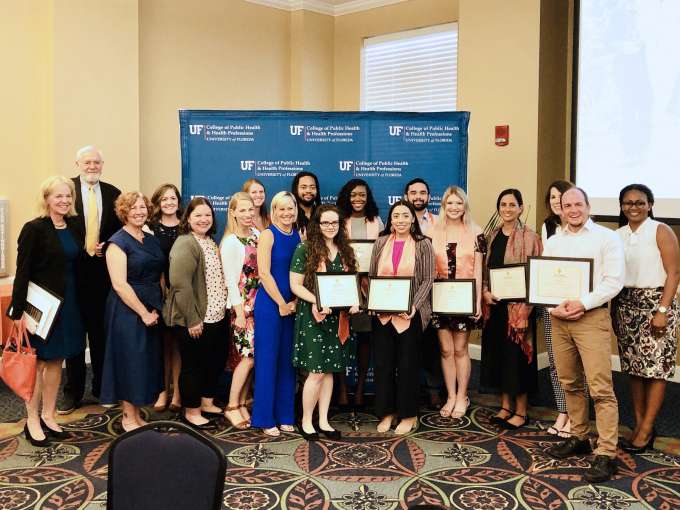 When Sarah McKune, Ph.D., signed up for a class on global health partnerships as a Master of Public Health student at Emory University, she had no idea she was about to learn from a giant in public health.

The instructor was William Foege, M.D., M.P.H., a former director of the Centers for Disease Control and Prevention (1977-83), who is credited with developing the global strategy to eradicate smallpox in the 1970s.

Despite his legendary status, McKune found him humble, accessible and relatable. He arranged many opportunities for students to hear from global health leaders as guest speakers. As the co-founder of the Task Force for Global Health, a senior fellow with the Bill and Melinda Gates Foundation and a health policy fellow with the Carter Center, Foege had no shortage of colleagues to invite to class. Impressed by his wisdom, his respect for students and his gift for storytelling, McKune accepted Foege’s invitation to serve as a teaching assistant for the following three semesters. Later, McKune acted as a researcher, writer and editor assisting Foege with books and speeches.

“I don’t know another public health hero alive today who has the track record and has so shaped the face of humanity in so many ways,” McKune said. “He has brokered some of the most important public/private partnerships of our time, though he will never take any credit for these.”

McKune, who attributes “much of what I know, what I care about and how I approach the world” to the years she spent listening to and learning from Dr. Foege, is now a research assistant professor in the college’s department of environmental and global health who studies global health nutrition and food security. She was thrilled her students had the opportunity to hear from Foege when he gave the keynote presentation at the induction ceremony for UF’s chapter of Delta Omega, the public health honor society. It was one of several events in May celebrating the college’s graduates, culminating in a recognition ceremony featuring a keynote address by George Hagerty, Ed.D., a pioneer in education for people with disabilities.

At the Delta Omega ceremony, several public health faculty, alumni and students were inducted as new members. In his remarks, Foege told graduating students that he envied them starting careers in public health.

“To think of going in to public health and global health now instead of 60 years ago with the new tools, new information, new resources and new interest, I just do envy you,” he said. “You have a great life ahead of you.”

Foege spoke about some major figures in medical and public health history, including Werner Forssmann, the first person to perform a heart catheterization in a human in 1929 (on himself), and Edward Jenner, the pioneer of the smallpox vaccine, which was the world’s first vaccine. He also described a public health champion who doubtless saved  many lives, but is not well known: Pearl Kendrick, the co-developer of the vaccine for whooping cough. 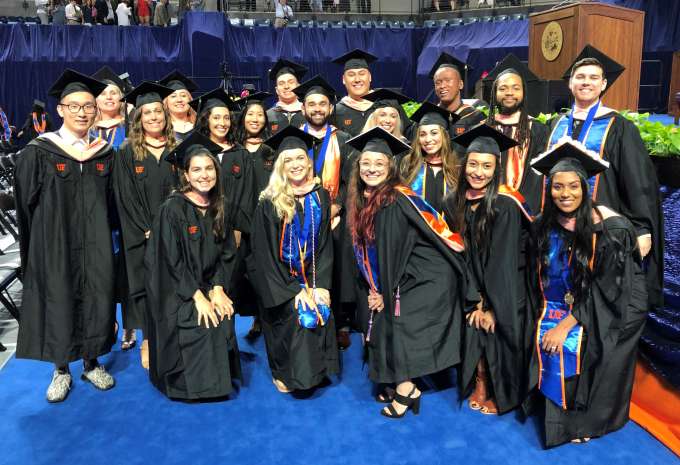 Later that week, 536 College of Public Health and Health Professions students were awarded bachelor’s, master’s and doctoral degrees at UF graduation ceremonies. Foege received an honorary doctorate at UF’s doctoral degree ceremony in recognition of his many contributions to global health.

The festivities were capped off by the college’s recognition ceremony, an opportunity to individually recognize each graduate. Hagerty, the ceremony’s distinguished speaker, is president of Beacon College in Leesburg, Florida, the first accredited college offering four-year degrees designed around the needs of students with diagnosed learning disabilities.

At Beacon College, Hagerty is working with faculty, administrators and with the students themselves on a variety of living and learning initiatives embracing curricular, co-curricular and extracurricular programs, as well as integrating a four-year career development and entrepreneurship track. He previously served as president of Franklin Pierce University in New Hampshire, and as provost and professor at Hellenic American University in Athens, Greece.

Hagerty recounted the beginnings of Beacon College when, in 1989, a group of parents established a college for students with learning disabilities, such as dyslexia, ADHD and related conditions.

“They had fidelity to creating an environment and an instructional system by which students with learning and attention issues could benefit and could graduate,” Hagerty said.

Enrollment has grown from 187 students when Hagerty arrived as president five years ago, to 400 students today. With 15 percent of the higher education population having a learning or attention issue, Hagerty sees Beacon becoming a national model.

At Beacon, students receive personalized attention, including individualized mentoring by learning specialists. It is an approach that can be applied to many fields, Hagerty told graduates.