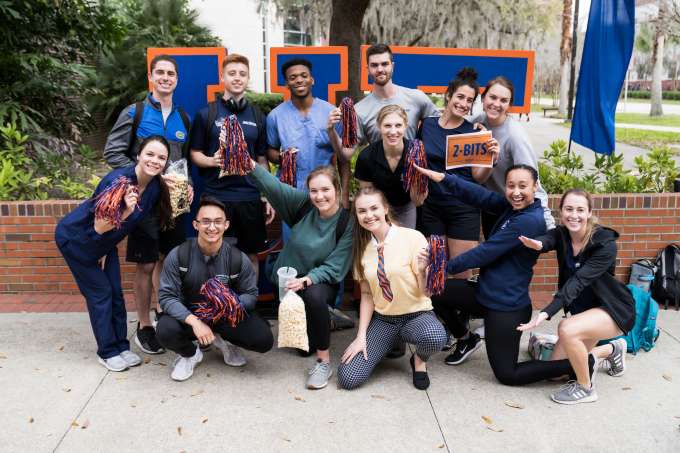 Doctor of Physical Therapy students join the fun at Pop Out & Give, held in the HPNP courtyard and hosted by the colleges of PHHP, Dentistry, Nursing, Medicine and Pharmacy. Photo by Louis Brems.

College of Public Health and Health Professions alumni, faculty, staff, students and friends rallied on February 20 to support the college’s education, research and service activities with 288 gifts totaling more than $27,000.

Gator Nation Giving Day, the University of Florida’s one-day giving campaign, encouraged Gators from all over to “Stand Up and Holler” for UF. The 24-hour campaign far exceeded the university’s goal of 15,000 gifts by raising just over $23.5 million from 16,993 gifts.

The campaign is named in recognition of the beloved Gator football game cheer made famous by George Edmondson Jr., better known to fans as “Mr. Two Bits.” Edmondson’s iconic orange-and-blue striped necktie was used as a symbol to promote the campaign.

Gainer, the vice president of meetings and events at the American Occupational Therapy Association, was inspired to create the challenge because of the growth and direction the department is taking under the leadership of Chair Sherrilene Classen, Ph.D., M.P.H., OTR/L.

“And I’m comfortable, so I’d rather give away some of my money while I’m alive so I can see the benefits instead of just leaving it after I’m gone,” said Gainer, who has created scholarships at UF, AOTF and the institutions where he received his associate and bachelor’s degrees. “I love getting cards from the students who have benefited from the scholarships; that means a lot to me.”

Dr. Morey was recognized for leadership in psychology research and education.