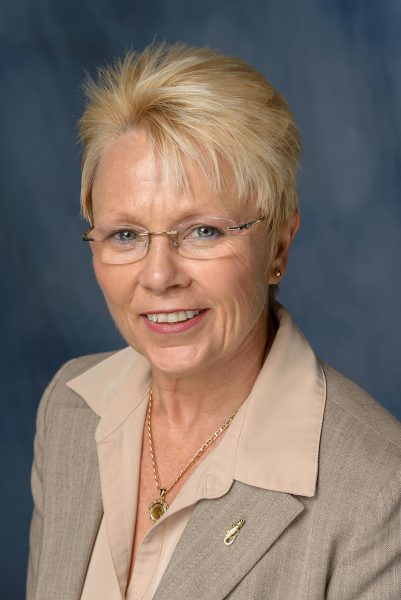 The College of Public Health and Health Professions named Sherrilene Classen, Ph.D., M.P.H., OTR/L, FAOTA, FGSA, the Outstanding Alumna of the Year. She was recognized at the college’s convocation ceremony May 5.

Classen is a professor and chair of the college’s department of occupational therapy, and an extraordinary professor at Stellenbosch University in Cape Town, South Africa. She is an internationally-funded prevention-oriented rehabilitation scientist who studies fitness-to-drive issues in at-risk drivers using clinical assessments, driving simulators, on-road assessments, in-vehicle technologies and automated vehicles. Her scholarly work uses both a public health and a rehabilitation science approach to bring depth and breadth in understanding driving from multiple perspectives.

Since her academic career started in 2002, she has received competitive external funding totaling approximately $6 million from agencies such as the National Institutes of Health, the Centers for Disease Control and Prevention, the Department of Defense and the Department of Transportation, as well as agencies in Canada and abroad. She has authored or co-authored more than 130 peer-reviewed publications, book chapters and special journal issues. She is the editor of a handbook on driving simulation and editor-in-chief of the Occupational Therapy Journal of Research. Classen is a Fellow of the American Occupational Therapy Association and the Gerontological Society of America, and is an inductee of the American Occupational Therapy Foundation’s Academy of Research, the foundation’s highest scholarly honor.

A 2004 graduate of the college’s Master of Public Health program with a concentration in epidemiology, Classen shares some of her UF memories and insights:

Favorite UF memory: The day I received my National Institutes of Health-funded career development award. This was one day before my post-doc appointment ended, and as such it facilitated me getting an appointment as an assistant professor at UF. I remember Dean Bob Frank, who was PHHP’s dean in 2004, said, “If this situation played out as a movie, you could not have asked for a better script!”

Best lesson learned: In academia — and in science — you cannot be successful in isolation. One’s own goals, academic preparation, thoughts and dedication are very important attributes. However, to make lasting and meaningful contributions, those qualities will need to be supplemented and shaped by what I call the 4 Cs: communication, collaboration, some competitiveness and a fair dosage of co-mentoring from a wide variety of people who have gone before you and know the ropes. These, along with one’s own qualities, are necessary and critical for solidarity, success and building a sustainable and satisfying career in leadership.

UF faculty members who influenced me the most:  Dr. Mary Peoples-Sheps, retired senior associate dean for public health; Dr. Craig Velozo, past associate chair of the department of occupational therapy; Dr. William Mann, professor emeritus and past chair of the department of occupational therapy; and Dr. Nabih Asal, professor emeritus of epidemiology, all taught me valuable lessons. From Mary, I have learned that grace combined with intellect take one a long way in working with a team of people. Craig helped me to question my assumptions, to focus on the details in scientific work and to play devil’s advocate while scrutinizing my own and others’ scholarly work. Bill supported me in honing my grant writing skills, and Nabih was instrumental in helping me to decide on completing a MPH with a concentration in Epidemiology.

People would be surprised to know: I am an introvert who receives my energy and re-charge from being as close to the beauty and splendor afforded by natural “warm” environments, including mountains, oceans, deserts, springs, lakes, rivers and canyons. Of course, this must include chunks of time dedicated to being physically engaged in activities, such as climbing, exploring, biking, hiking, swimming, kayaking and canoeing, in these natural environments.